The rapid growth of holiday facilities in SE Asia have played an important part in the region’s development and stability and has drawn millions of visitors to the region each year. However, it has long been recognised that the intrinsic value of any destination is soundly based on a states ability to preserve and visually promote the unique aspects and its culture and its historical sites. So often there is added value to holiday memories when they are enhanced by interactions with the local people and with an appreciation of the cultural background. To exemplify this idea, we have listed five Southeast Asian holiday destinations that appeal to people who enjoy sharing and/or observing some of the local cultural and historical aspects of their chosen holiday destination. 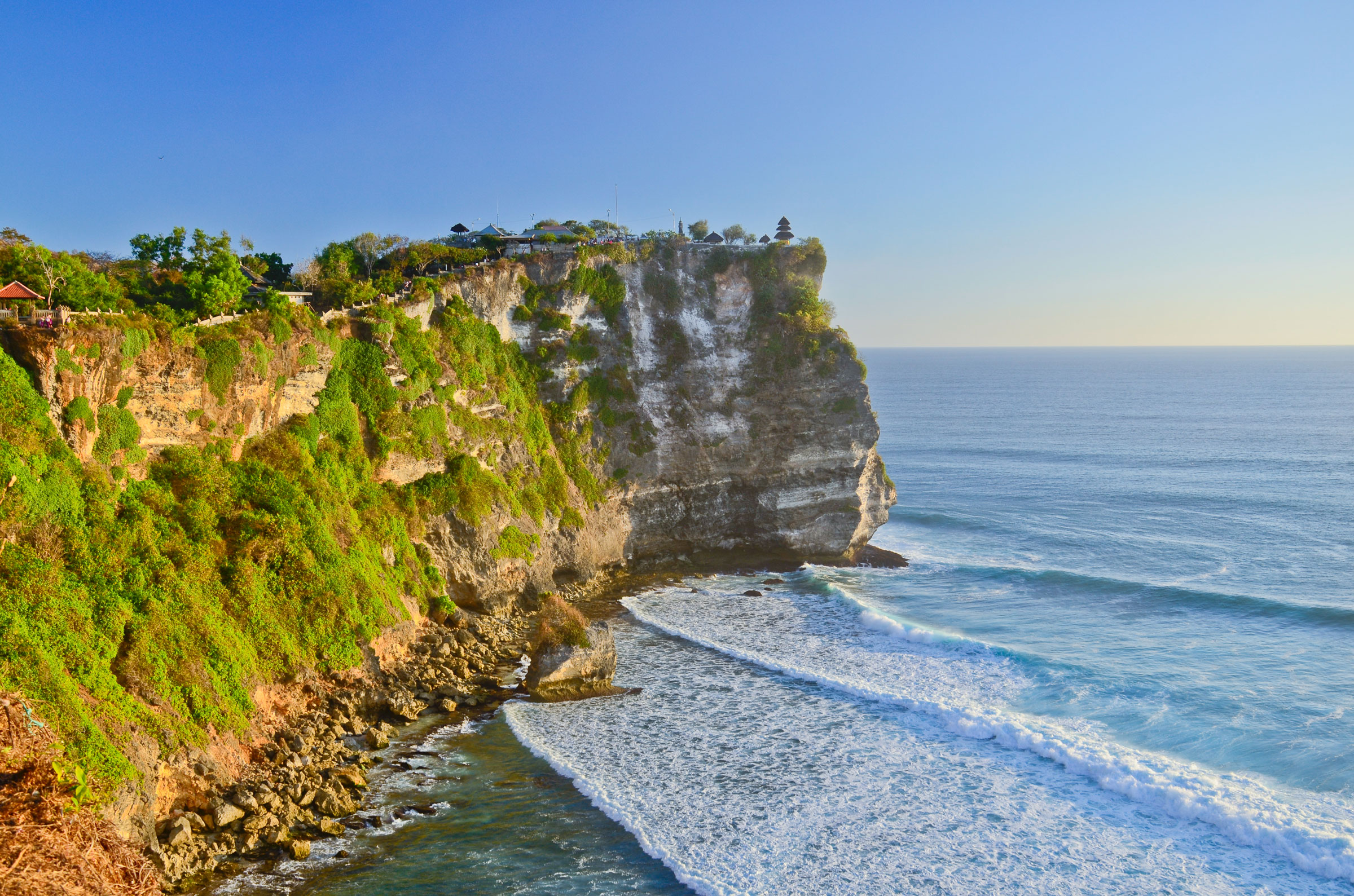 Bali’s earliest inhabitants have been traced back as far as 2000 BC, but it was Indian and Chinese influences along with Hinduism in the 1st century AD that created the lasting cultural milieu that is so iconic of Bali today.
Despite their extensive adjustment to tourism the Balinese have managed to maintain their age-old culture for the last 1,000 years, and their colourful religious ceremonies and processions have become major tourist
attractions. One of Bali’s most popular cultural sites is the Tanah Lot Temple that sits on a large rock just off the coast in the Tabanan regency. Founded in the 16th century by Dang Hyang Nirartha to appease the sea gods, this temple is one of Bali’s largest tourist draw cards. Tidal erosion has meant that access is restricted to local deities, however, the site and the remarkable spectacle of its amazing sunsets leave an unforgettable experience.
Perched on a cliff top overlooking the Indian Ocean, Pura Luhur Uluwatu is considered an architectural wonder. Built in large part of black coral rock the temple is one of the 8 Kahyangan Jagat holy temples that are spread
across the island. From here one can get a magnificent view of the South Western peninsula of Bali. 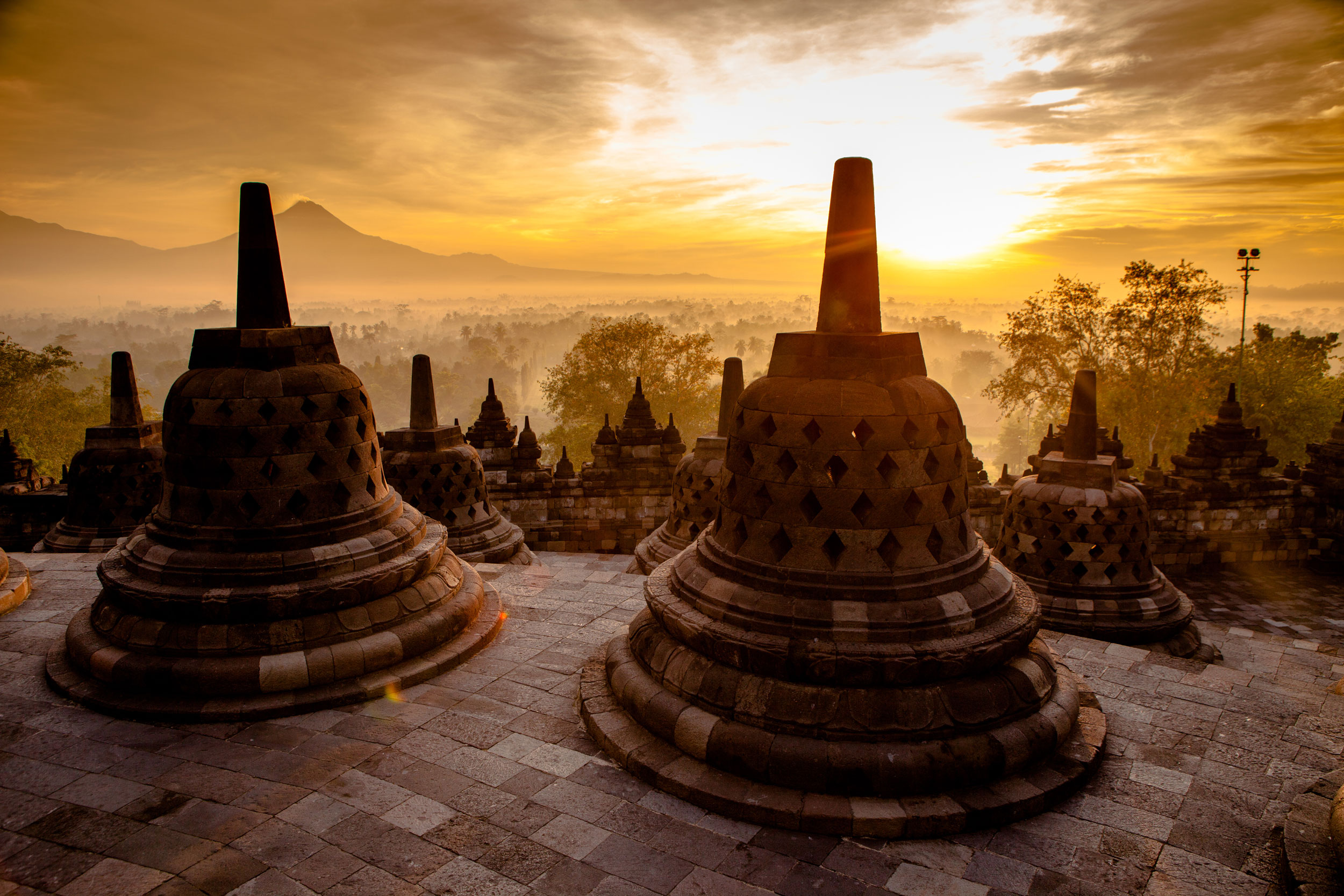 Indonesia’s special region of art and culture, Yogyakarta is the capitol of education, fine art, music, drama, ballet and poetry which flourish here along with ancient architectural sites and historical buildings. Yogyakarta is the home of the region’s ‘Keraton’ or royal palace. Built by a Portuguese architect in the mid 18th century as a recreation and defensive centre with swimming pools and relaxation rooms for the Sultanate of Yogyakarta, it has become renowned as the Taman Sari Water Castle. This was the place the royal family took refuge in when under threat by their enemies. Nowadays tourists and locals alike can visit to stroll through the palace’s lovely gardens.

Another of the most visited sites in this region is the 9th century Temple of Borobudur, the largest Mahayana Buddhist Temple in the world. Built by King Samaratungga of the Wangsa Dynasty in 824 AD the temple has been listed by UNESCO as a World Heritage Site. The spectacular edifice of Borobudur lies between the Sumbing and Merapi volcanoes, and it is highly recommended to scale a volcano reaching the top before sunrise for the breath-taking view as the sun comes up. 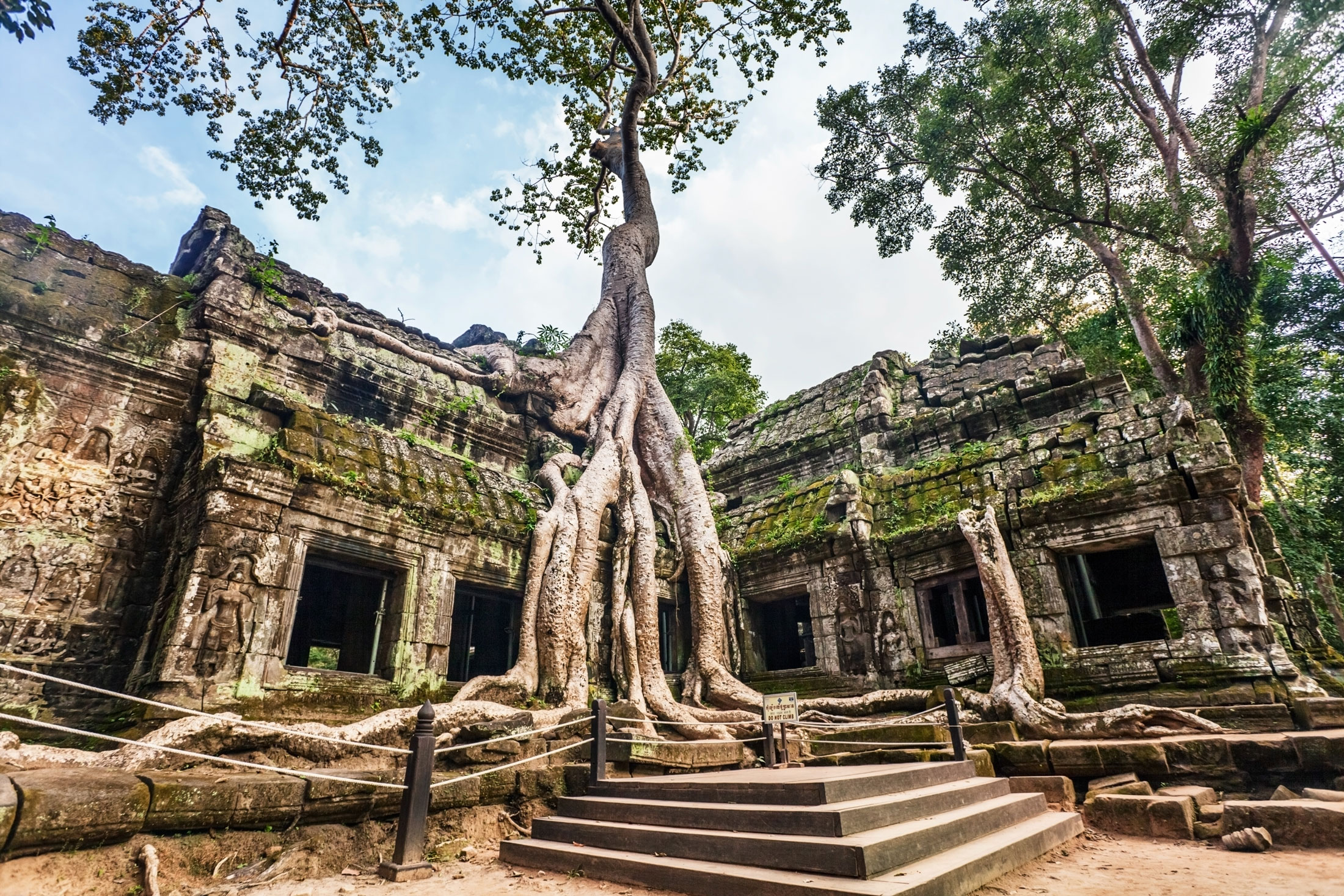 Located in North Western Cambodia, Siem Reap is where the famous Angkor Archaeological Park is located. Home to the world famous temple ruins of Angkor Wat, Angkor Thom, Bayon and many others, the park has been designated as a UNESCO Heritage Site attracting million of visitors every year. The most compelling feature of Angkor Wat is, of course, the temple itself, built for Khmer King Suriyavarman II in the 12th century as his state temple and capital city and, eventually, his mausoleum. Angkor Wat is Cambodia’s principal attraction for tourists and has become one of the most recognisable landmarks in the world. It is best to
visit in the early morning during sunrise or late in the afternoon before sunset.
Situated about a kilometre from Angkor Thom, Ta Prohm is one of the most popular temples after Angkor Wat and Bayon. Originally called Rajavihara, Ta Prohm was founded in 1186 AD by King Jayavarman VII as a Mahayana Buddhist monastery and university, and has been left in much the same condition as it was when it was found. Trees growing out of the ruins in their jungle surroundings create a somewhat magical setting, a sort of “Jungle Jimish” adventure area to excite those that love to explore natural settings. 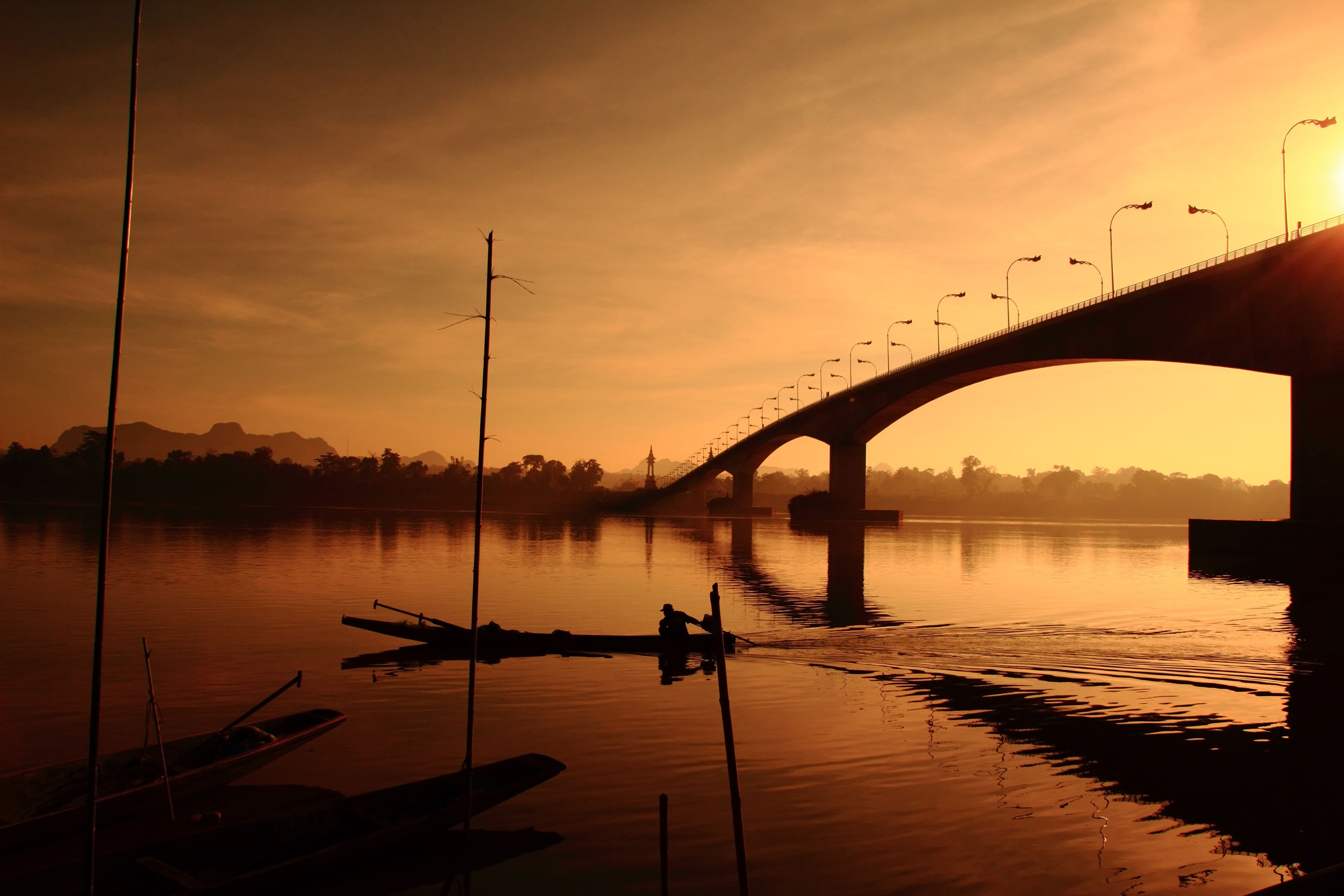 The former capital city of Laos, situated in the north central region of the country, Luang Prabang is considered one of Southeast Asia’s most interesting destinations. This small UNESCO World Heritage City has a charm of its own as it sits peacefully beneath a temple-topped hill at the confluence of the Mekong and Khan Rivers.
Luang Prabang is a city filled with Buddhist temples and monasteries, a happy, bustling place as the locals go about their business, surrounded by charming French colonial buildings and local timber built Lao structures.
The most important temple to visit is Wat Xieng Thong or The Temple of the Golden City. The temple includes a monastery and is an important monument to Laos’s religious spirit, royalty and art. Luang Prabang appeals to visitors as a gentle city, and early every morning hundreds of monks leave their monasteries to walk through the streets and collect alms. 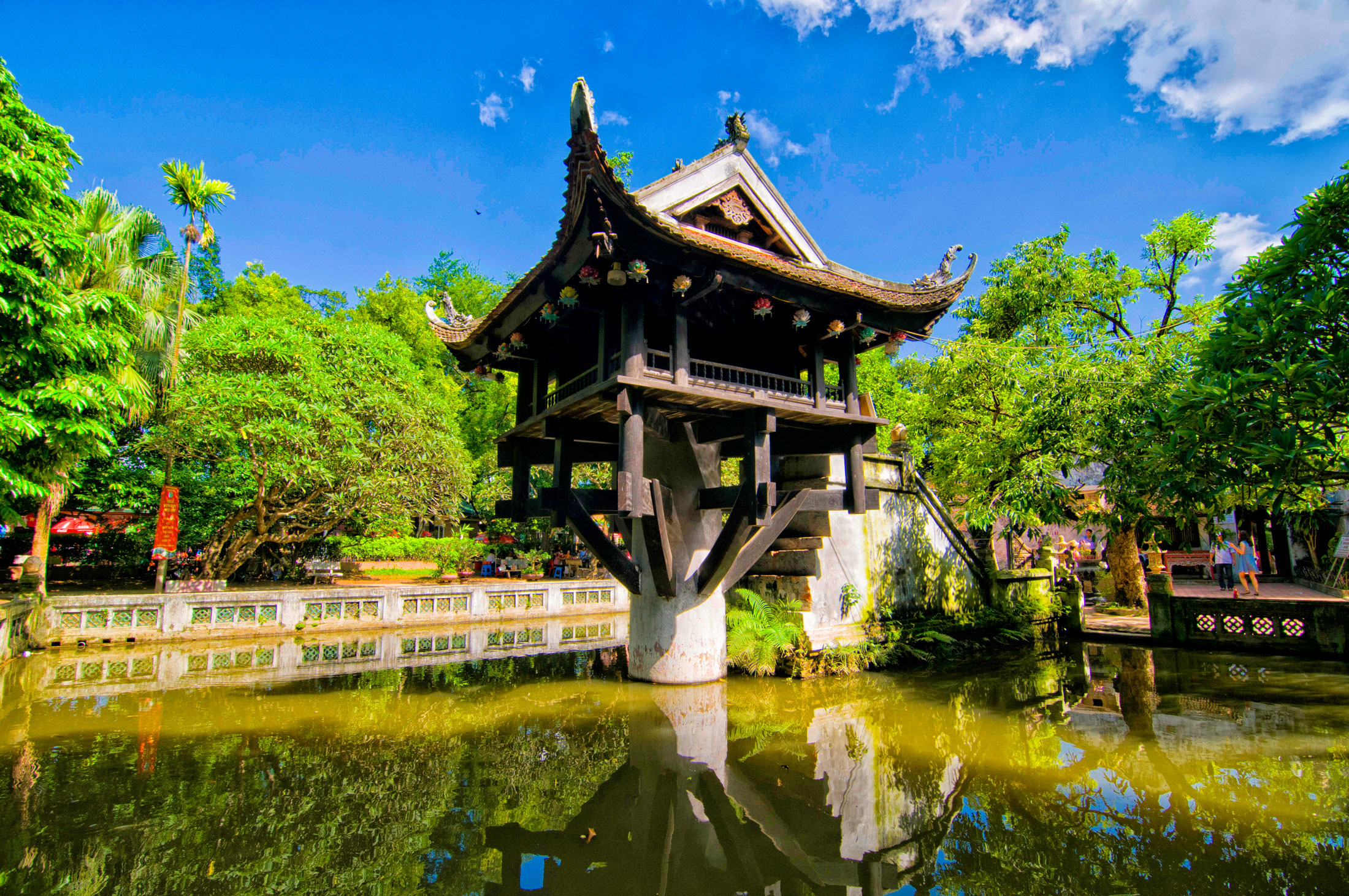 As the capital of Vietnam, Hanoi is home to numerous popular attractions, including fascinating historical sites and ancient ruins.
Set on a small peninsula on the Eastern side of Hanoi’s West Lake, Trấn Quốc Pagoda is regarded as the most ancient Buddist temple in Hanoi dating back more than 1,500 years. The architecture of this Buddhist temple reflects the subtle combination of the solemn, beautiful landscape and the peaceful, quiet ambience of West Lake’s surface. If you would prefer a more tranquil destination, the lake of Hoan Kim would be a good place to choose. In the bustling city of Hanoi, these tranquil sanctuaries are beautiful places to walk around and provide peaceful retreats to get away from the pace of modern life.