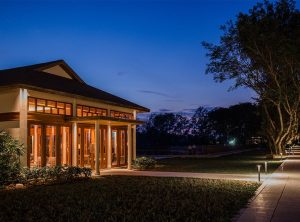 History is being made in Hue, Vietnam, with the opening of the Azerai La Residence. The former residence of the French Resident Superieure has been stripped and redesigned in order to create a beautiful space reflecting hotelier Adrian Zecha’s goal of simplicity and elegance.

Set on the south bank of the fabled Perfume River, the 122-room hotel now boasts a new spa equipped with six treatment rooms and offering steam, sauna and ice fountains. The hotel’s gymnasium was relocated and restocked with new state of the art equipment. The hotel’s bar, Le Gouverneur, and the hotel’s restaurant, Le Parfum, were both redesigned to follow Azerai’s design aesthetic.

The Azerai La Residence marks the second hotel in the new group formed by Zecha. His motivation has been to create a compelling and elegant space that will serve as the quintessential hospitality experience in the city while being offered at an affordable price point. Hue natives anticipate the hotel will become one of the most compelling hospitality venues in Southeast Asia.