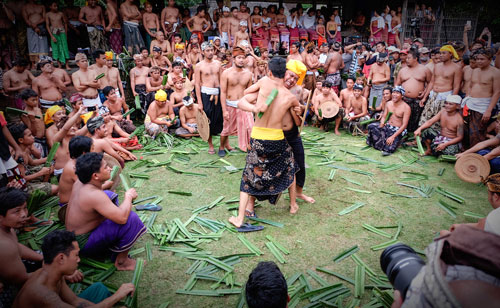 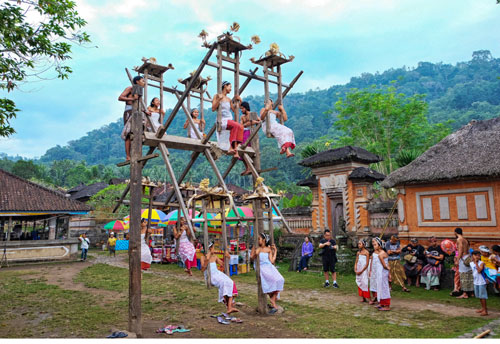 Balinese people express their rich traditional culture in a myriad of fascinating ways, and Perang Pandan is one of the manliest of their annual traditional rituals.

Also referred to locally as ‘mekare-kare’ or ‘megeret pandan’, Perang Pandan is a mass coming-of-age ritual dedicated to Indra, the Hindu god of war and sky. All the male villagers take part fighting each other in
friendly duels, armed with a small rattan shield in one hand and a tied bunch of thorny ‘pandan’ leaves in the other.

The women take part but only as spectators. Their role is to look exotically appealing draped in Balinese traditional costume and makeup, and to distract their foes while cheering on their friends, lovers and male family members fighting for their honour in this noble and ‘manly’ ritual battle.

Every year the Perang Pandan ritual is held around the month of July by the people of Ngusaba, Tenganan Dauh Tukad traditional village, about 78 kilometres northeast of Denpasar. The festival is open to the public, which means that anyone can not only watch but take part as long as they follow the rules. Don’t be surprised if you see foreigners in the arena with the locals. Although none of the participants hold back their ‘punches’, this festival, strangely, is more about having ‘fun’ than being violent or gory. After the fight is over, the combatants apologise to their opponents and tend each other’s wounds using turmeric and traditional medicine.