KINTAMANI IS A REGION SITUATED ON THE WESTERN EDGE OF LAKE BATUR, A CALDERA FORMED BY BALI’S SACRED MT. BATUR. FAMED FOR ITS COOLER HIGHLAND WEATHER AND FORESTED TOPOGRAPHICAL SCENERY, KINTAMANI IS THE BIRTHPLACE OF THE BALI AGA PEOPLE – THE ORIGINAL BALINESE INHABITANTS DATING BACK TO PREHISTORIC TIMES.

As well as the regions historical importance to Bali the area has its own unique mini environment. Kintamani lays some 1,000 metres above sea level and is over shadowed by Mt. Batur at almost 1,500 metres. Visitors can be enjoying refreshments while over looking the blue waters of lake Batur when in late afternoon the cooler air causes fog to blanket the whole area, reducing visibility to just a few feet. It is here that morning visitors to Pinggan village gather to witness the changing colour hues as mountain mists disperse creating Bali’s most spectacular sunrises.

During a visit here one should not miss the opportunity to seek out the Resto Apung Kedisan one of Kintamani’s most anticipated culinary destinations. The name is aptly translated to floating restaurant and is a venue blessed with both magnificent views while serving a unique range of freshwater fish caught from the very lake the restaurant rests

on. To get the best out of its relaxing ambience, sit on the open-air area of the pier under a clear sky, gaze beyond the lake to the majestic rise of Mt. Batu with a warming drink while lunch is being prepared.

Synonymous with calderas of course are hot springs and the Batu caldera has its own at the village of Toya Bungkah. The sulphur-laden waters here are known for their healing powers and as such the springs are of significant spiritual value locally. The location itself makes Toya Bungkah natural hot spring a recommended place to visit, while swimming in the soothing warm water, visitors are treated to the magnificent scenery of Mount Batur under a blue sky. 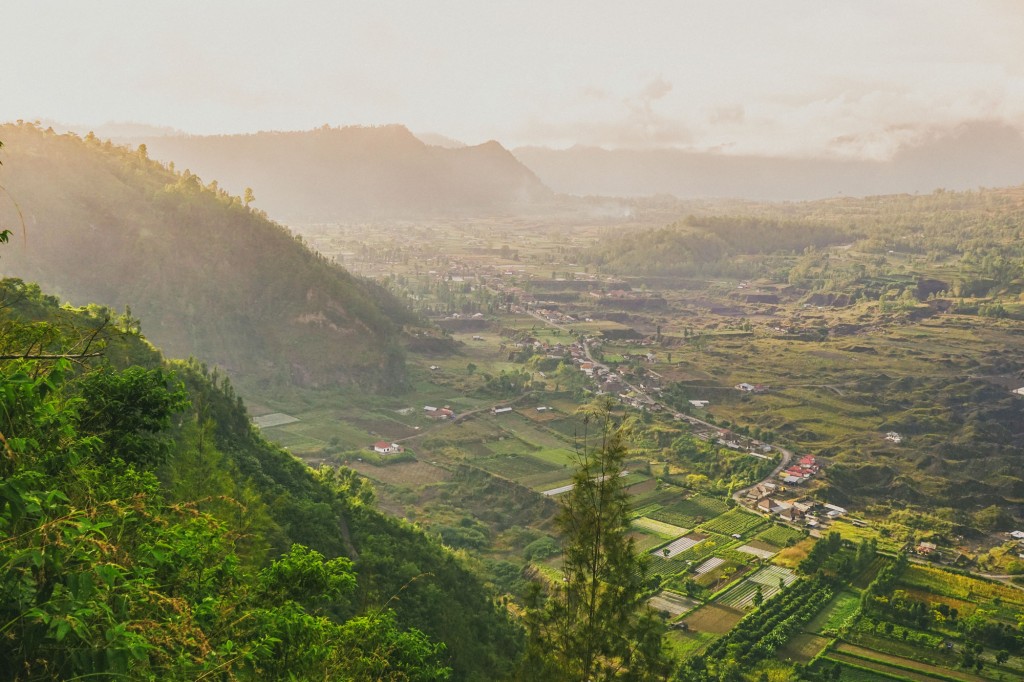 For those looking for more detail of the local culture here, Pura Ulun Danu Batur should be one of the destinations to stop by. Built in 1926, it is Bali’s second most important temple, second only to Pura Besakih itself. “Ulun Danu” literally translates as “head of the lake”. Originally, the Pura and village of Batur were located down in the caldera at the foot of Mount Batur. This was until a violent eruption destroyed both entirely except for the most important 11-tiered structure that was left unscathed. The villagers then moved to the highest rim of the caldera, where they rebuilt their community and the temple, worshipping the goddess Dewi Danu for her blessing upon the lake and their surroundings.

Kintamani is a most worthwhile place to visit. It is a break from the typical tropical holiday environment to one of unique interest and scenery.