In stark contrast to Britain the people of Bali have a well integrated society based on a strong community structure. The communities have clear sets of rules and a fundamental principle that a person is expected to be a part of the community and contribute to it and in return the community will look after and support them.

Young men in the “difficult” age of their late teens are still very much a part of their communities. Like most young men of their age they may pursue an, at times, rebellious lifestyle of smoking and hanging around on street corners but when it comes to a ceremony they will there dressed in their traditional clothes and taking part in the rituals with the rest of their community. 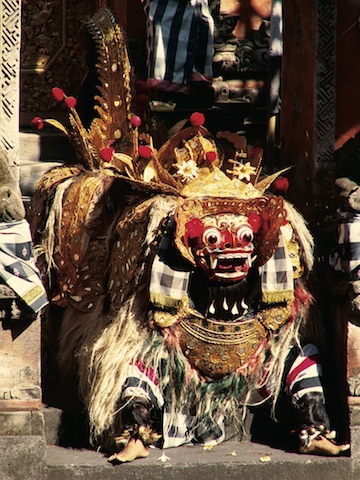 It all starts very early in life with parents, extended families and the local community all sharing the load of parenting and providing solid role models for their children. Here in Bali people still have time for their children playing with them and teaching them to do all sorts of things such as making and flying kites or building Ogoh Ogohs.

In Bali it is rare to see parents chastising their children unlike in Britain where most public displays of interaction between parent and child involves the parent telling the child off or even smacking them. Some say that Indonesian parents spoil their children but the social awareness and general temperament of children and young people here in Bali suggests perhaps that it is the Balinese that have got it right.

But is all this changing?

If we go to the rice fields these days we find that there are few young people working in the fields with their parents. Young men these days prefer to get a motor bike and hang around with their friends in the towns. They expect a better lifestyle. Some will find jobs and start to move up the socio economic ladder but others will not. Without skills and, jealous of those with money, are these young men destined to follow their British counterparts into anger and violence?

Already on the streets of Kuta there is worrying evidence of rising levels of violence, drug possession and crime.

There are also a number of powerful external influences that are undermining Balinese society. An example is the endless stream of sinetrons played on television channels that do not reflect either the cultural attitudes or the circumstances of the average Indonesian person. Indonesians are generally polite people who avoid confrontation, behaviours totally at odds with the openly aggressive angry exchanges often portrayed in the sinetrons most of which present imaginary storylines based on wealthy Jakarta lifestyles far removed from the lifestyles of ordinary Indonesian people.

We have to question how much these fictional fabrications are unsettling to Indonesian society. It is of concern that there are very seldom examples of normal, well balanced Indonesian people portrayed in these programmes.

Add to this is the constant promotion of a materialistic, competitive lifestyle. Money, like a cancer, is starting to eat into the fabric of Balinese society. Harmony, that precious essence of the Balinese people, is starting to break down.

Another powerful influence eroding social values is the widespread incidence of rampant corruption in which wealthy government officials, devoid of any sense of empathy or morality for their fellow citizen, demand illegal payments from even the poorest of people. More and more a person’s success in life is being measured not by respect but by how much they are able to extort from the helpless individuals who fall into their clutches.

Can parents look after their children under such pressures? I heard a tragic story recently of a poor rice farmer who sold his ricefield to buy a motor cycle for his son. No doubt the father was under a lot of pressure from the son. The ramifications of this are enormous, the farmer sold his source of income and his family’s future to buy a motorcycle that would probably be damaged or sold in only a few years time and may even lead to the death of his son, the person expected to take over the role of supporting the family in years to come.

The widespread selling of land to wealthy people from outside Bali at ever increasing prices is a very serious situation that can only lead to social problems in the future. The land is often sold for some short term material gain such as buying a car. Once it has gone the escalating prices mean that they will never be able to buy it back. Without land to pass on to future generations are we seeing the squandering of the future for the young? Are the Balinese slowly becoming dispossessed in their own island.

The frightening images of rioting young people across Britain is a stark reminder that we must constantly consider how we build and maintain healthy societies and how we can support young people and instill sound social values that will help them to realise a better future both for themselves and for the people in the world around them.

Perhaps we should remember that we are the ancestors of the future and the seeds we sow now will bear fruit, good or bad, in the generations yet to come.