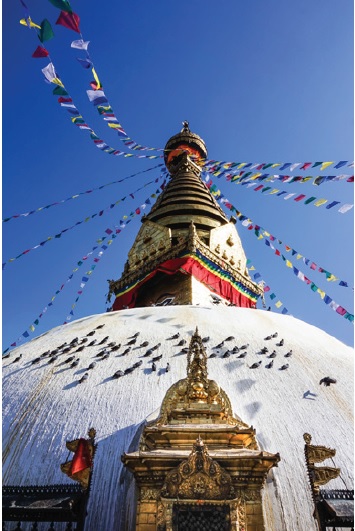 On arriving in Kathmandu, the capital city, I decided to stay near Thamel, an area that has been the centre of the tourist industry in Kathmandu for over four decades.

There are countless interesting things you can see and do in this city but my time was limited, so I made a plan to visit three places, the Kathmandu Durbar Square, the Boudhanath Temple and the Swayambhunath Temple.

Kathmandu’s Durbar Square is one of three Durbar (royal palace) Squares in the Kathmandu Valley of Nepal, all of which are UNESCO World Heritage sites.

The famous Boudhanath is a stupa located about 11 km from the centre of town on the northeastern outskirts of Kathmandu. Dominating the Katmandu skyline the stupa’s massive mandala makes it one of the largest spherical stupas in the world.

Situated atop a hill to the west of Kathmandu lies Swayambhunath Temple, also known as the Monkey Temple, which is home to hundreds of monkeys considered holy to Tibetan Buddhists and Hindus. The Swayambhunath complex has been in use since the 5th century A.D. and consists of a magnificent domed stupa, a collection of other shrines and temples, a monastery, a museum and a library.

I left Katmandu and headed for Chitwan, one of Nepal’s 75 districts. My destination was the Chitwan National Park, the first national park in Nepal which was granted World Heritage Site status in 1984, to see the rare one-horned rhinoceros, an endangered animal. I set off on Elephant Safari Ride in the morning and took a Jeep Safari later in the afternoon, all in all, a wonderful day and a unique and incredible experience.

After spending only two nights at Chitwan, I moved on to yet another UNESCO World Heritage Site, Lumbini, which is recognised as the birthplace of Siddhartha Gautama, who found enlightenment, became the Buddha and founded Buddhism.

In Lumbini is an expansive 2.56sq km sacred garden containing fourteen temples. I managed to visit seven of the temples by rickshaw, three of which were outstanding namely The Royal Thai Monastery, The Great Lotus Stupa (the German Temple), and the World Peace Pagoda.