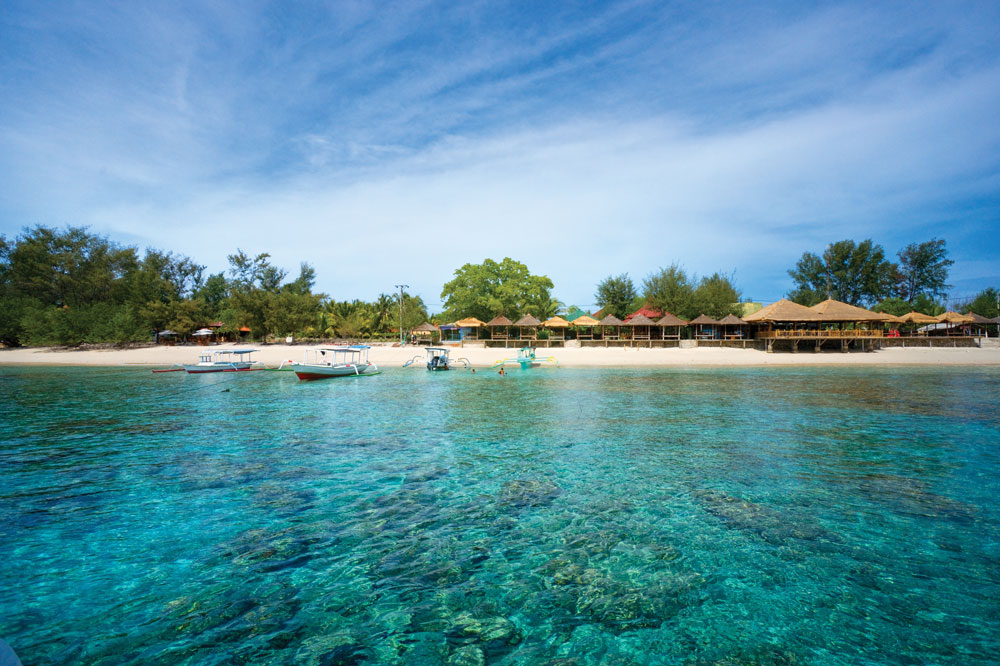 I was fairly excited about this trip and I was already in the reception area at the Blue Water Express office around 7.30 am and checked in at the counter. At exactly 8 am, we departed from the Serangan harbour in a Blue Water Express fast boat.

The weather was nice and clear, the waves were quiet and very friendly and approximately half way across the Lombok Strait, we were so lucky to have encountered a group of about 50 dolphins. They were swimming alongside the boat; some were jumping as if they were welcoming us. They entertained us for a few minutes and after they vanished into the ocean. This encounter was priceless; everyone in the boat was looking out of the window and amused by this rare view.

Less two hours later, we made a stop at Lombok and dropped off some of the passengers and we then continued for another 15 minutes to Gili Trawangan. The scene of the white sandy beach, and crystal clear blue water greeted me and since, I knew I will have a fantastic holiday.

The word ‘Gili’ means ‘island’ so when people talk about the ‘Gili Islands’ this is incorrect. Gili Trawangan is the best known of three islands and the others are Gili Meno and Gili Air. Trawangan is the furthest from the mainland of Lombok but was the first to become commercialised. Fortunately, no cars or motor cycles are allowed on the island but the horse-drawn ‘Cidomo’ are plentiful and bicycles are also available for rental; riding a bike on sand can be tricky though. Some people say that the Gilis are like Bali in the old days and that is in some ways true!

I remember years ago when visiting all three of the Gilis in 1990 that they were very primitive but the residents were extremely
welcoming and some fabulous coral, including the rare blue variety, was to be seen within a few metres of the beach. Snorkelling off Gili Trawangan is still very exciting; exotic fish and turtles are still in evidence and for those who love diving, Gili offers great dive sites with a variety of topography (slopes, walls, ridges and canyons) as well as a huge amount of various marine life. If you want to see the best the Gilis have to offer, you need to go soon.

The name of the island is derived from ‘terowongan’ the Indonesian word for tunnel because the Japanese occupiers built a tunnel there during WWII. It is a small island measuring just 3 by 2 kilometres and the resident population is estimated at about 800 people; most of whom originated from Sulawesi rather than from Lombok. It also claims to be the smallest island in the World with an Irish pub: Tîr na Nôg.

The island’s economy is centred on tourism because it is too small to support any serious agricultural enterprises and too remote for industry or commerce to be practicable.

Years ago, tourists and backpackers, would start their journeys in Lombok and rent a boat to take them to Gili Trawangan, if they wanted to stay overnight, it was possible to stay with a local resident but sleeping on the beach was not uncommon.  Nowadays, with direct boat trips from Bali, it isn’t even necessary to set foot upon the main island of Lombok and there is a great selection of places to stay. Choose from the five-star resorts of Ombak Sunset Hotel or Hotel Vila Ombak or the four-star Villa Almarik. There are plenty of other places to stay at lower prices, such as The Villa Grasia Resort, but do check out the options on the internet.

Eating out in Gili Trawangan is so much easier now as there are at least 14 great restaurants and many others that are less expensive but still good value. Other recommended places include Karma Kayak for their barbecues and tapas, and Trattoria for the excellent Italian menu. Readers in Bali will know the original Trattoria in Jalan Laksmana and already be aware of the fact that you will get good value for money.  Try also Rudy’s Pub and Scallywags, which are very well regarded.

Trawangan Island is a perfect getaway location. Just imagine all the things you would do on an idyllic tropical holiday – strolling along white sandy beaches without a care in the world, swimming in amazingly clear water, enjoying seaside barbecues, cocktails beside the pool and dancing under the moonlight at crazy beach parties.

This is Gili Trawangan!